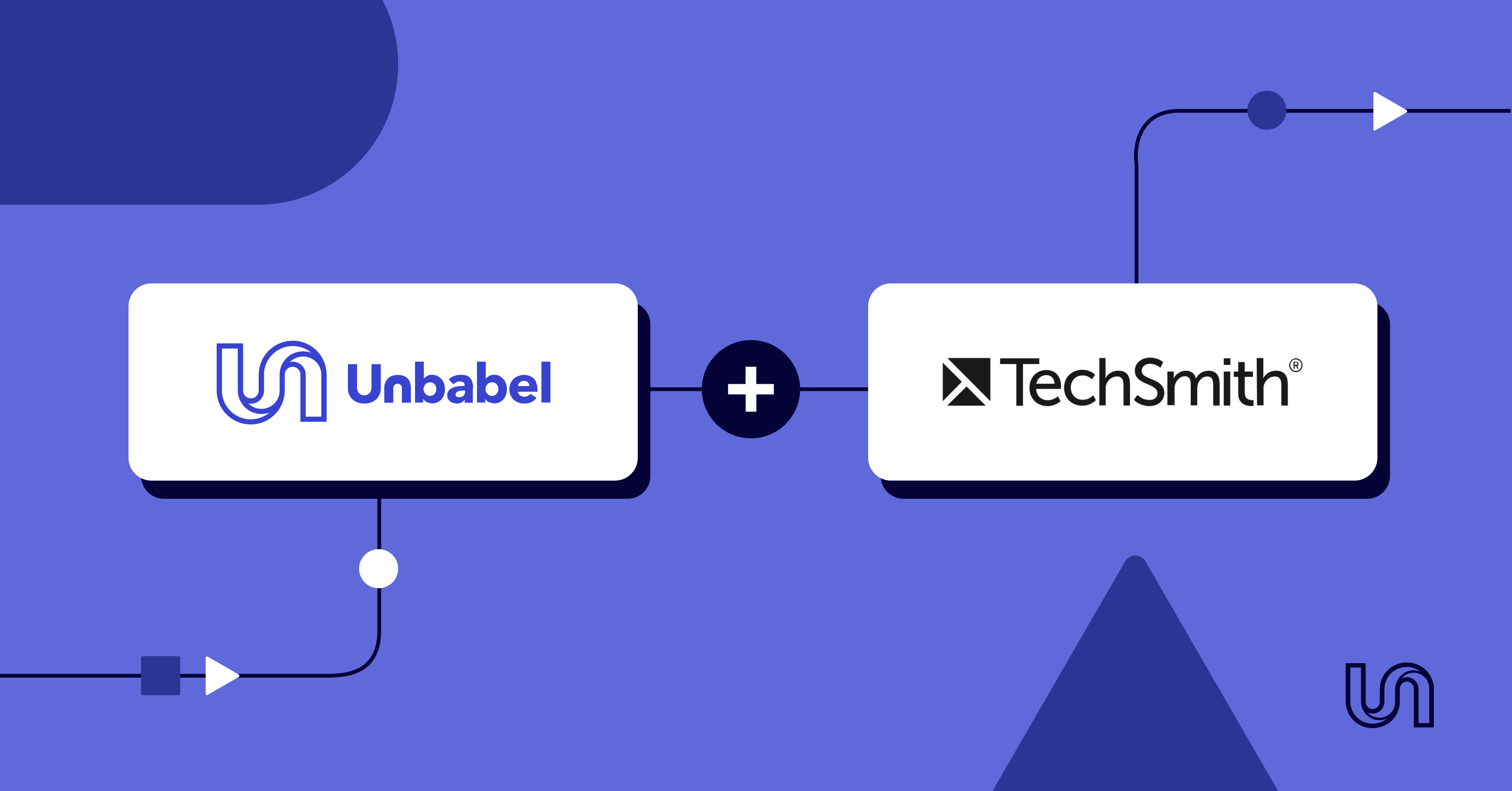 TechSmith had challenges finding high-quality native-speaking technical support agents, and customers frequently reached out to the team in long-tail languages that the small team of 17 agents could not cover. Unbabel’s AI-powered Language Operations (LangOps) platform has helped the team provide customer service coverage as promised and handle more ticket volumes in 15 language pairs.

TechSmith is a software company that specializes in screen capture, video hosting, and other technology. Home to the popular services SnagIt and Camtasia, TechSmith has more than 73 million customers across 100+ countries. Their customers range from Fortune 500 corporations to small businesses, government agencies, and educational institutions.

The TechSmith technical support team has always been lean, prioritizing quality over quantity. With just 17 agents, the team supports customers around the world in their native language. Even though the TechSmith support and help center resources are available in five languages — French, Japanese, German, Spanish, and Portuguese — they had difficulties finding the right support agents who could speak these languages and also possess technical expertise.

Delivering uninterrupted support to customers anywhere in the world

At one point, the team was working with just one native speaker each in German, French, and Japanese. If an agent was unavailable, users sending tickets in these languages would have to wait — or receive machine-translated responses that were not up to par. This made it challenging for the team to tackle the incoming ticket volumes in all the languages and maintain technical support SLAs. They also received customer support requests in languages outside the five they covered, which was challenging for the team to address.

TechSmith needed a solution that would easily integrate with Zendesk and increase agents’ bandwidth without compromising on quality. When Unbabel came highly recommended, Michael Spink, Technical Support Manager at Techsmith, knew that it was the best solution for his team. Right from pre-sales to implementation, Spink was impressed with the efficiency of the product and the process. The Unbabel team was always at hand during the comprehensive trial and smooth rollout to help the TechSmith team.

With Unbabel helping the agents with high-quality multilingual translation as they worked, the team is now able to address more customer queries than before: The support ticket volumes have been consistently high and rapidly increasing. Agent productivity has also increased, with the support team averaging at 1,100 foreign-language email tickets a quarter, up from about 800 before. The average wait times have drastically decreased, and agents are able to respond to tickets within one business day. For a majority of the tickets, Unbabel takes only 30 minutes or less to translate, which also has a positive impact on the average wait times. Every agent is now able to respond to users in any language, and the team has ramped up to cover support tickets in 15 language pairs. Unbabel enables the TechSmith technical support team to address support tickets not only in the five languages they cover but also in a few more long-tail languages.

TechSmith prides itself on its customer-first approach. Unbabel brought together the accuracy and speed of machine translation combined with the authenticity and refinement of human translation that the team needed to deliver fast, high-quality customer service.

“Unbabel has given us the freedom to hire for technical expertise and customer service skills,” Spink said. “Any agent on the team can handle requests in any language and have the same effect as a native speaker.” This also means that the team does not have to wait for a native speaker to be present to handle tickets, so there’s no interruption to service. There’s also a huge improvement in the turnaround time and waiting times for customers, with agents responding to tickets within one business day now without battling backlogs.

“More customers are reaching out to us in their own language, and Unbabel is only being used more and more,” Spink said. TechSmith agents have found Unbabel incredibly easy to use as well, and Spink has only received overwhelmingly positive feedback from agents and customers alike.

“Unbabel has allowed TechSmith to serve our customers in their language. I have not had a single poor interaction with the Customer Success team — whenever I’ve reached out to them, I’ve always received a near-immediate response and the best solution.”