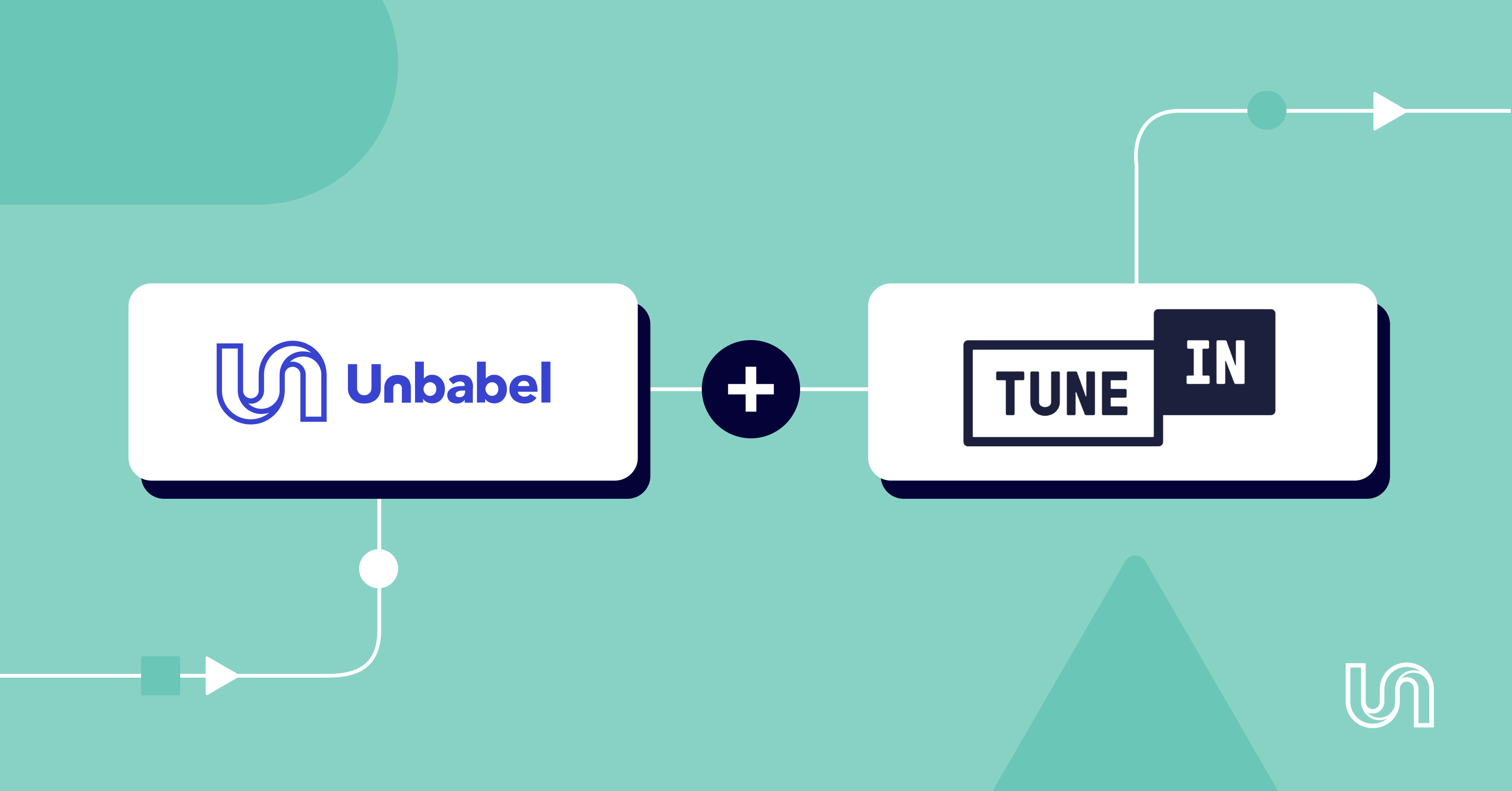 “We are absolutely thrilled with the support we are receiving, from account management, to onboarding, through to technical support. And the result, even compared with other localization vendors, is top notch. I would definitely see us adding additional languages, and expanding into other business units with Unbabel such as marketing and localization. I would recommend Unbabel to other people as well.”

TuneIn, one of the most widely used streaming audio platforms in the world, prides itself on delivering the power of audio, design, technology, and up-to-the-minute news to its 75M+ active audio fanatics around the world. With radio stations spanning 13 languages across the world — the podcast purveyors were experiencing growing pains when it came to providing local customer support, pains which plague most organizations serving multiple markets.

TuneIn had initially made the decision to hire individual agents to support audiences less by market and more by language, under the notion that some markets shared language pairs, such as Spanish across LATAM and Brazil and Portugal. However, they soon encountered that pairing support by languages restricted them from fully embracing the personalization of their local markets, as some words have different meanings to different cultures or even no meaning at all. They simply weren’t set up to optimally serve their consumer base in a way that resonated with them.

They started by providing dedicated agents to support Spanish, Portuguese, German, and French, but due to lack of demand for support in some of those languages, TuneIn downsized to having two agents for Spanish. Ultimately, this tactic proved fruitless, only further validating their need for a more cost-effective and scalable solution.

The hourly rate to hire dedicated Spanish-speaking agents was significantly higher (~20% more) than for English-speaking agents, and was doled out regardless of the work produced. With a core focus to clear the Spanish queue first, and then move on to complete English inquiries, TuneIn uncovered that Spanish agents were spending almost three-quarters of their day supporting secondary inquiries in English, as Spanish tickets generated a much lower frequency.

With that, they simply couldn’t justify the cost of a full headcount, and more so, they weren’t able to justify further resources down the line, including a dedicated French and German agent.

At this juncture, it was either they continue to carry out translations at a premium, or get better reception by turning to a new airwave — AI and automation.

TuneIn had initially found Unbabel years prior at LocWorld — a localization convention for international business, translation, localization, and global website management. And after receiving an email outreach and product demo, exploring firsthand how it integrates into their CRM system, Kustomer, they were convinced. It was an easy business case to make: They compared the cost of  an English-speaking agent, able to service all their languages using Unbabel, versus the hefty price tag associated with individual Spanish speakers, considering their productivity.

With TuneIn planning to double down in markets and further expand into languages like Dutch, Unbabel’s Language Operations platform was able to fully accommodate their growth trajectory, with 28 languages to one single agent.

The streaming station sensation experienced a 14% cost savings by switching from their old model of hiring dedicated agents to Unbabel, and is currently supporting five additional languages to support Spanish — Dutch, French, Portuguese, German, and Japanese — that they did not have the resources, budget, (nor justification) for before.

Plus, with an emphasis on ensuring that CSAT scores remain high and reflect the same great quality as having native agent support, their percentage of positive CSAT for Spanish tickets has climbed from 30% to 59%, when comparing July YoY.

They’ve been able to maximize their existing resources by arming all fully English-speaking agents with multilingual superpowers who can now service all languages, simultaneously. This has empowered them to hire specifically for customer service expertise and skill, and not have to factor in language or location — their new agents will now be based in Jamaica, without having to be burdened with finding German, French, and other native agents within the same proximity.

As a global organization with global talent who speak a broad range of different languages, TuneIn conducts occasional spot checks on Unbabel’s multilingual tickets with their native employees hailing from Brazil, Mexico, and Japan, and are pleased to report back that the translations have all been spot on.

“As a Japanese native, I personally spot check the Japanese tickets. We are extremely satisfied with Ubabel’s quality. I have no complaints about that.”

“Having Unbabel has made it super easy for both my agents and BPO partners. When we were shopping for a new BPO partner, we told them our need is for only English agents because we use Unbabel. And they informed us that they have groups already set up using Unbabel, and it’s an effective tool. We felt reassured and knew we were in great hands.”

Tune in to see how Unbabel can help you scale your support operations for global markets while reducing costs.