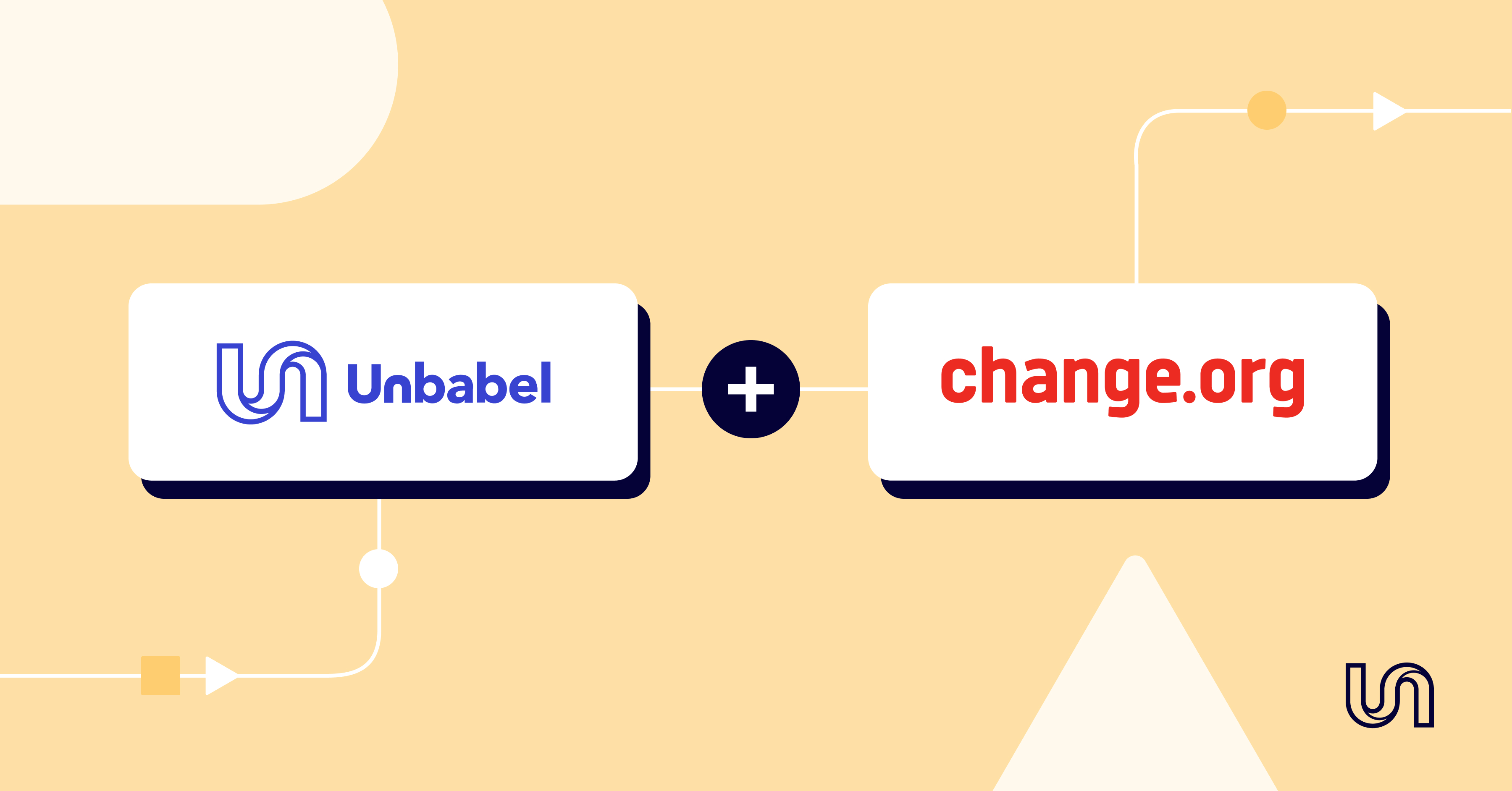 Since 2018, Change.org’s number of users worldwide has more than doubled. Scaling with this user base came with a steep learning curve, which was especially felt in customer support. They had to figure out how to expand every aspect of the organization to meet the users’ demands, while still providing consistently excellent customer service at all times. With a team of only twelve to fourteen support professionals (only some of them bilingual or multilingual), they needed a long-term solution that enabled them to deal with increasing queries in languages they couldn’t support. Unbabel matched Change.org’s needs perfectly in terms of price, integrations, and quality.

Change.org is a global platform that allows users to start, sign, and support petitions to create social change. With more than 450 million users in 196 countries, Change.org is the world’s largest nonprofit-owned tech platform for social change. Their goal is to increase civic participation in initiatives that impact people’s lives and communities and incentivize decision-makers to act on the demands. Approximately 70,000 petitions are created and supported every month by the global network of users — which grows by 1.7 million new people every week — enabling them to get governments and authorities to directly engage with these powerful campaigns. Since Change.org was established in 2007, more than 76,000 campaigns on the platform have turned into victories.

Change.org has close to half a billion users worldwide creating and supporting petitions on the site. This number keeps growing, with 1.7 million new users every week. Change.org has an ambitious goal: to encourage citizens to raise awareness and enact social change through petitions — and to keep that cycle going for continued impact. This means that the product needs to be easy to use and the users should feel supported in their effort on the platform.

It’s no wonder that for the User Success and Support team at Change.org, customer satisfaction is the most important metric. This includes making sure that the reason a user is on the platform is fulfilled quickly, easily, and effectively, and at the same time, giving users fast and accurate support when they have issues. But providing consistently excellent customer service in all the languages they operate is hard to do — especially with a lean support team of twelve to fourteen professionals who deal with up to 2,000 customer queries each week.

While they were initially able to handle the issues in English, these amounted to only 40–45% of all the inquiries they received. Even with the team’s multilingual skills, it was challenging to resolve issues and meet sudden demands in new languages.

Their first steps to address these shifts included implementing knowledge bases that allowed users to self-serve and routing the tickets to various team members based on priority and relevance. However, while these reduced the number of issues the team received, they didn’t sufficiently address the increasing demand. Hiring short-term contractors came with a slew of its own challenges, and the team had to resort to using Google Translate sometimes.

When the team started seeing consistent volumes in new languages, they needed to find a solution that would help them communicate with these users effectively in any language, work well with their existing tools, and let them stay within their budget — all without compromising on quality.

Unbabel integrated seamlessly with Salesforce causing minimal to no disruption to their existing workflows. With near real-time translation, Unbabel’s integration with Salesforce allowed the team to communicate with their customers in any language. The User Success and Support team started using Unbabel with 12 languages, and they were able to quickly scale into new languages. Today, Unbabel helps the team support their users in 22 language pairs (including dialects) on Salesforce.

Not only that, after evaluating several solutions, Change.org found the translation quality at Unbabel to be the best. Unbabel’s AI-powered platform along with a global network of human editors ensured that every message from the customer and the agent was translated not only quickly, but also accurately.

Unbabel’s Language Operations platform allows Change.org to keep the cost of operating in multiple languages low and still support its millions of users — and easily scale into new languages if the need arises — freeing up their support agents to focus on issues that actually need attention.

With the kind of transformative impact Change.org creates around the world, it is necessary for them to build an authentic relationship with their users. Unbabel’s human-in-the-loop translation helps the support team maintain their human and emotional voice and tone. With customer satisfaction being the support team’s number one priority, it was crucial to measure the success of their multilingual customer support and ensure that they were delivering the same excellent service in all the languages.

After the User Success and Support team started using Unbabel, they discovered that their Customer Effort Score (CES) was on par with that of native speakers, if not higher. Change.org’s Quality Assurance (QA) score is usually high with native speakers, but with the Unbabel platform, the value has increased further by 4%.

“When we found Unbabel, we were really pleasantly surprised because it natively and seamlessly sat in with our existing services and workflows. The price was very attractive, and the quality was outstanding, so for us, it was a no-brainer.”

— James Baldwin, Director of User Success and Support at Change.org

The Unbabel Language Operations platform empowers the support team at Change.org to stay lean and help millions of users every day. With Unbabel, they’re able to focus on creating positive change in the world — one petition at a time.