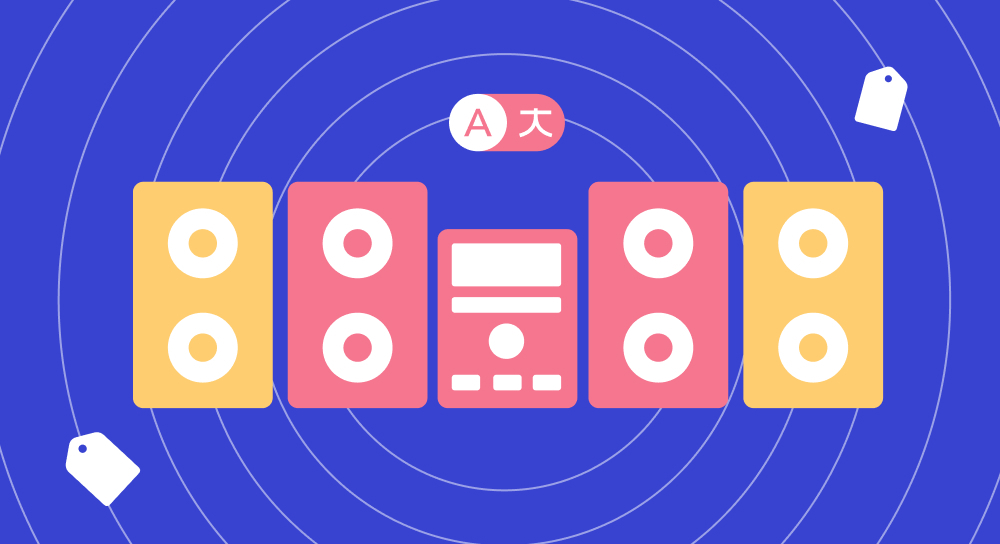 You’ve likely owned a Panasonic device in your life. After all, the Japanese electronics conglomerate sells home appliances, cameras, audio and visual equipment, computer hardware, and mobile devices all over the world to the tune of $73 billion in revenue.

A few years ago, the company made a strategic decision to shift from a transactional customer experience to a customer-centered service delivery model. That is to say, Panasonic no longer wants to just sell a product to a customer and have that be the end of the relationship — instead, it would be the beginning.

In this blog, we’ll detail the key challenges Panasonic faced in adopting a customer-centered approach and how improving communication using human-in-the-loop machine translation helped the retailer achieve its goals in Europe.

Within a business, customer service departments are usually considered to be a cost center that weighs on the bottom line. Hiring support agents to assist customers in using products they’ve already purchased only eats away at profit margins — at least, that was the old wisdom.

Now, companies, especially retailers, are discovering that customer support or success teams can serve as revenue generators by helping retain and even upsell customers. This is exactly the thesis Bruce Swan was hired to prove when Panasonic brought him on as European Customer Care General Manager in 2018.

Swan and his customer service director had their work cut out for them. First, they had to convince leadership there were opportunities to be had by investing in retooling customer service away from a transactional model and toward a customer-centered approach. The powers that be finally came around to the idea, and Swan retrained his support agents “to help customers get the most from [their] products and to suggest complementary Panasonic goods or services that would enhance the end-user experience.”

Then came the really hard part.

How do you support a customer throughout an enduring customer journey when you don’t speak the same language? In short, you can’t. Communication is key to any relationship, including one between a business and the people they serve.

Swan’s department provides support in 23 languages to Panasonic customers in 24 European countries. While his team, based in Eastern Europe, is largely proficient in at least one language other than their native language, even his most talented agents aren’t capable of writing or speaking in their second language at 100% fluency.

Languages have a lot of nuances, regional differences, shorthands, and turns of phrases that are hard to pick up unless you’re a native speaker. This can spell disaster when it comes to customer interactions, as language misunderstandings can reduce efficiencies and alienate customers. In our research of consumers across six countries, 68% of survey respondents said they’d ditch a brand that didn’t offer native-language customer service for a brand that did.

Understanding the need to improve communications between his support team and customers speaking a foreign language, Swan went on a hunt for a translation solution to help break down language barriers. Frankly, he wasn’t impressed with anything he tested — until he received a serendipitous LinkedIn notification from Unbabel inquiring whether Panasonic was facing multilingual challenges.

The timing couldn’t have been better.

When Swan first learned of Unbabel’s human-in-the-loop machine translation solution, his first thoughts were on security. He wanted to ensure customer data remained private and in compliance with European laws on data protection. Inspection of Unbabel’s rigorous security and privacy controls allayed his concerns, and he was ready to roll out the product.

Initially, Panasonic launched Unbabel to support its Swedish, Danish, Norwegian, Finnish, and Dutch email channels. The multilingual translation AI did a great job in translating the languages between the customers and the support agents, but that’s not to say there weren’t hiccups along the way.

Panasonic and Unbabel learned pretty early that Dutch was a complex language the AI could not fully comprehend, resulting in errors in translations. So Unbabel leveraged its human translators to refine the AI’s algorithm, training it on all the intricacies of the Dutch language. The process was very collaborative leading to vastly improved Dutch communications in as little as six months.

The numbers tell the full story. Panasonic’s net promoter score (NPS) remained high during the implementation of Unbabel. The cost of providing support in the five languages plummeted by 60% and agents were able to answer 100% of all customer emails in 24 hours, up from 50%.

Unbabel has proved instrumental in helping Panasonic achieve its goal of shifting to a customer-centered service delivery model. So much so that the electronics giant scaled the use of Unbabel to eight languages, adding Bulgarian, Polish, and Czech to the previous five.

In the future, Swan hopes to leverage Unbabel for real-time communications so that English-speaking agents can conduct live chats with colleagues and customers in a wide variety of languages. He even envisions a role for Unbabel in future applications including interactive voice response (IVR) systems, AI-driven self-service repair platforms, and contextual FAQs.

Retailers looking to create lasting and fruitful customer journeys can emulate Panasonic’s success by partnering with Unbabel to facilitate native-level multilingual translations that lead to customer success. Unbabel easily integrates into CRMs so that businesses and their existing customer support teams can quickly expand into new markets and provide assistance in a range of languages – all without having to invest in establishing a local support hub in each new location.