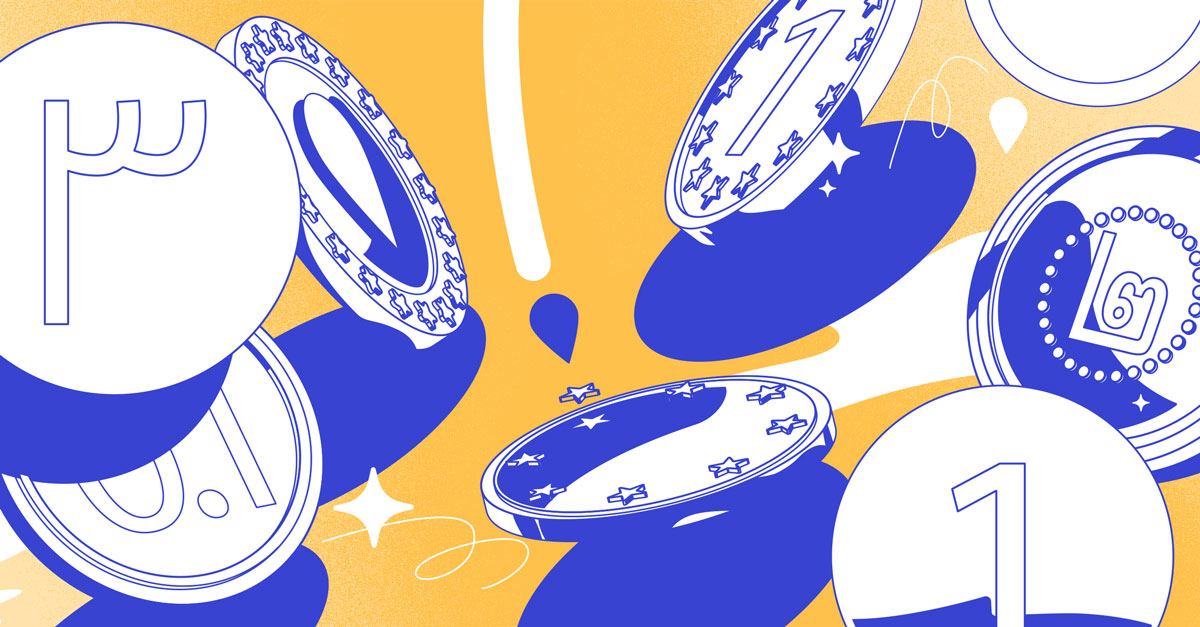 Currency is a medium of exchange for goods or services and varies from country to country.

With 195 countries in the world and 180 currencies recognized by the United Nations, currency localization is vital for the growth of cross-border ecommerce. Localizing currency is complex, it requires the use of patterns, symbols, and codes to indicate the currency and the correct exchange value. Supporting currencies from multiple locals in your e-commerce website is a key component to improving the customer experience as you take your business global. In this blog post, we list some considerations when managing multiple currencies on your site for your global audience.

Websites accepting money that a shopper doesn’t recognize or use could create confusion or distrust. Properly localizing currency improves the user experience by increasing customer confidence and reducing shopping cart abandonment. The Common Locale Data Repository (CLDR) has been implemented as the international standard for formatting amount, date, and time for currency, making the currency localization process easier, consistent, and reliable.

Currency must be uniquely formatted for each country and the differences can cause confusion for those that are unfamiliar with formats and conversions. Adhering to international standards reduces errors and miscommunication during the localization process. To get a better sense of issues that could arise with inaccurate currency localization, imagine adding an item valued at $1000.00 and receiving a statement for $1467.76. Although the currency was reflected in dollars and you’re shopping from New Zealand, you may not have realized the currency shown was in United States Dollars (USD) and not in New Zealand dollars (NZD). The conversion happened on the backend, causing you to pay 46% more than you expected.

Here are some of the key elements used to indicate the origin and value of modern-day currency and avoid mishaps during the localization process, like abandoned carts, registration dropouts, and poor user experience.

Governments worldwide must adhere to the requirements dictated by the International Organization for Standardization (ISO). The Currency System consists of a family of software and services licensed that governments use to produce and distribute money throughout the economy. The Currency System is also licensed to use specific three-letter Alpha codes for currency worldwide, such as ISO 4217. This code is often referred to as a SWIFT currency code.

Currency symbols are the graphical representation of a currency. For example, £ is the symbol for Pound Sterling, $ for dollars, € for Euro, or ¥ for Yen, and so on. Depending on the local custom, the placement of the symbol can be either before or after the currency value.

Example: How to localize the dollar

Although over twenty countries use the dollar there are several ways to indicate the country referenced. The US dollar, for example, is written $5.75, USD 5.75, or US $5.75. If a person from the USA travels to Canada, the local currency should reflect that change. For example, the USD would become $5.75 or CAD 5.75.

Formatting is used to convey the value of a particular currency. For example, numbers are separated using decimal commas, decimal points, and spaces in between.

In the USA, the currency symbol is placed before the value and the comma is used to indicate thousands: $15,000.20. You may also have noticed the space missing between the numbers and the symbol.

As a matter of fact, the UK and the USA are quite unique in using a point as a decimal separator and a comma to separate thousands. Most countries would do the opposite, and yet others use spaces instead.

In India, the three rightmost digits of an integer are grouped, while others are separated into pairs: ₹12,34,567.89.

Many countries use Western Arabic numerals, 1, 2, 3, 4, 5, etc. There are also a few regions that use different numerical alphabets such as Eastern Arabic, Bengali, and Thai. Languages such as Arabic and Hebrew are written and read from right-to-left (RTL). However when it comes to numbers accompanying currencies, they often tend to remain left-to-right (LTR), which causes unique challenges as your software will need to render bidirectional (BiDi) text. As an example, using the Western Arabic convention:

Mastering currency localization can be confusing from country to country and even regionally.

Business missteps can be avoided by using clear messaging and a carefully planned location strategy. Build trust with customers and reduce costs by accommodating multiple languages and currencies through the use of reliable software and adherence to international standards.

Here are some tips to help you accurately localize currency and value going forward.

Does your next venture include localization? Learn how we can help.