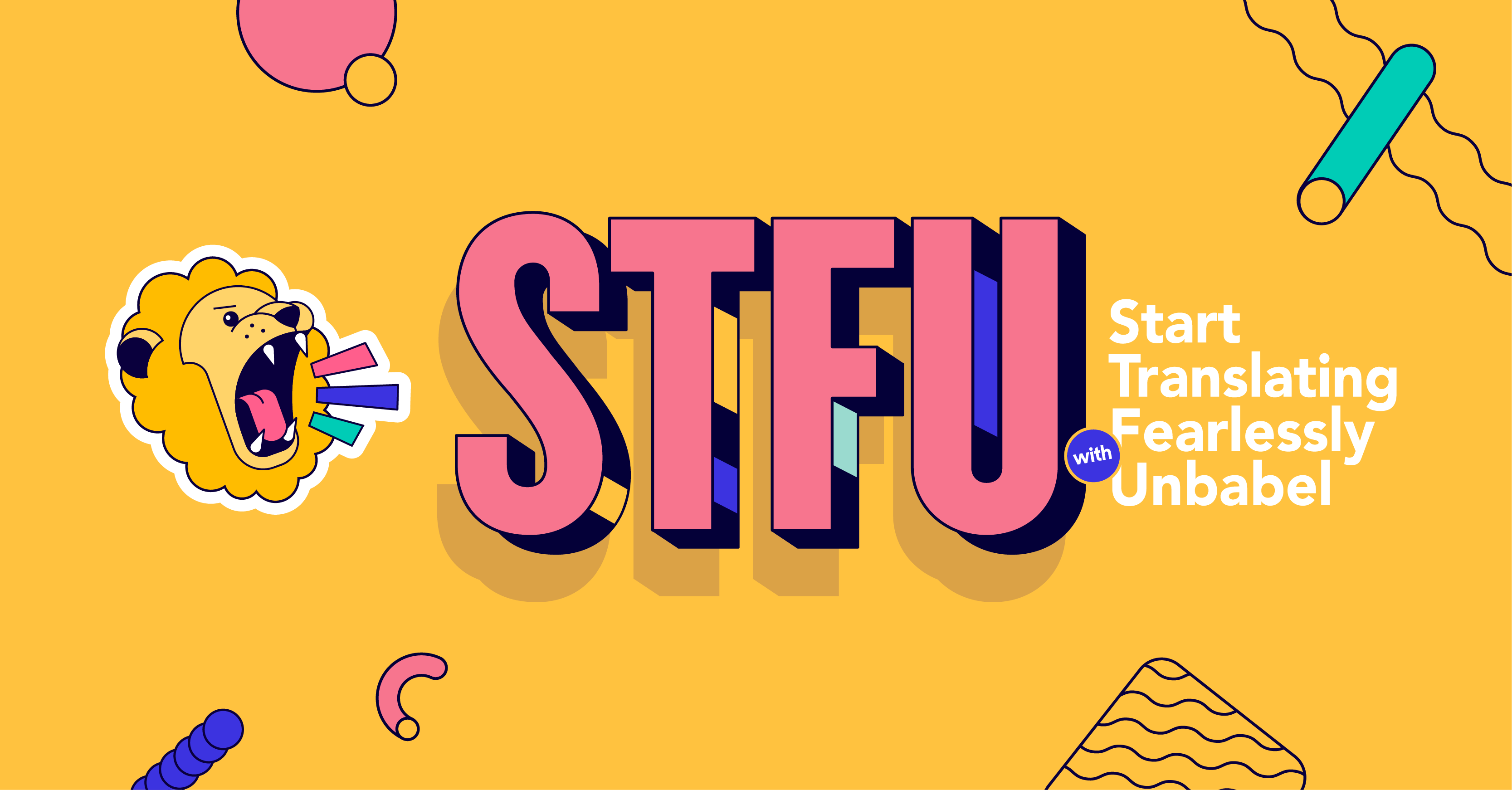 Contrary to the headline, we don’t mean that these brands have learned to be quiet. Quite the opposite, in fact. They all communicate with their customers with confidence, empathy, and efficiency — in any language, anywhere. Because we’ve given STFU a newer, more encouraging spin: Start Translating Fearlessly with Unbabel.

STFU is about empowering your business to see translation not as a burden, but as a key to growth and customer loyalty. It’s about making multilingual communication a foundation of your business. It’s about how high-quality customer service (CS) starts with speaking your customer’s language.

Of course, seeing how industry-leading brands STFU can be instructive for your own business. Below, seven brands that are doing multilingual CS right.

It was a natural fit between us and Microsoft, the trillion-dollar technology juggernaut that was founded in 1975. Our AI translation technology, after all, was built with Microsoft Azure and connected with Microsoft Dynamics 365 Customer Service. When the company’s venture fund, M12, invested in us in 2018, the relationship only strengthened.

Offering exceptional CS across languages and borders was essential for a global enterprise like Microsoft. We initially helped the company deliver email and chat support in Chinese for Office 365 users. A year later, we were facilitating its translation of seven languages across four lines of business. By 2020, we were handling 100% of its email and chat support — across 76 combinations of languages, products, and scenarios.

Before partnering with us, Microsoft worked with global call centers and native-speaking customer agents. Quality was inconsistent across languages. Now, its Customer Service and Support (CSS) team is streamlined and centered — with the high customer satisfaction (CSAT) scores to prove it — and is deploying Unbabel across 12 of Microsoft’s most common languages.

It’s unsurprising that an online travel agency and platform for tour guides and excursions — one that’s served travelers from 155 countries and has booked more than 15 million tours since its inception — would want to clearly communicate with its global customers. What is surprising, however, is that GetYourGuide sometimes found it challenging to support its wanderlust-filled international customers.

The first challenge was seasonal, with CS teams being overwhelmed with support requests during busy travel seasons, especially summertime. The second challenge was that GetYourGuide didn’t have the bandwidth to hire native speakers outside its core markets. Still, it didn’t want language to be an obstacle in expanding to any new market.

Native-language support, GetYourGuide knew, was crucial in keeping customers satisfied and loyal. The company decided that Unbabel was its best and most efficient solution for helping its team adapt to changing demand, in any language.

Our machine-learning language models get smarter over time, and training them has made them more attuned to how GetYourGuide communicates with its customers. While our human-refined AI translation technology might be invisible to GetYourGuide customers, the company’s support agents have a closed loop of feedback with our own CS team. With our human-refined AI translation technology, GetYourGuide is now able to do translations on par with native speakers — at a tenth of the cost of hiring native-speaking teams.

In an industry — cybersecurity — that conjures shadowy images of server rooms and Matrix-esque strings of code, Dashlane saw password management as a very human problem. The company was prioritizing simplicity and friendliness, but it found native-language CS to be far from simple. Should it spend more on the resources and agents required for high-quality support? Or should it begrudgingly accept that its support in languages like German and French wouldn’t be up to par with its English support?

Dashlane went with a third option: use a Language Operations platform like Unbabel.

We seamlessly integrated into its existing workflows and platforms, including Zendesk, which Dashlane was using to field 2,000 customer inquiries a month in German and French. Dashlane’s agents could now communicate with customers in another language without switching tools. Its support feels “human and authentic” and “speaks our product language,” according to a former Dashlane support manager.

Dashlane’s initial goal was for its new multilingual approach to match the performance of its English-speaking CS team — but it exceeded those metrics early on. Its agile new language strategy has it considering support for smaller markets, too, and it has improved first-reply time by 25% for both German and French customers.

If you’re an independent musician, you need a way to share your music with the world and, ultimately, grow your fanbase. TuneCore has been doing that for musicians — allowing them to sell their songs worldwide and keep 100% of their sales revenue — in a dozen countries since 2006. For years, though, there was a mismatch between the company’s global reach and its CS. Its support team was lean, often responding using Google Translate or recruiting a random employee with knowledge of the language. The approach wasn’t scalable, and it wasn’t always accurate.

When the pandemic hit, musicians turned to digital platforms for income, and TuneCore artists didn’t stop releasing music. The need for good CS was pressing. TuneCore partnered with us to remove existing language barriers for artist support. It can now confidently expand into new markets knowing that its CS team is able to translate requests into 29 different languages — compared with just five previously. Support tickets that once took weeks are now answered in half an hour. In the high-pressure world of independent music, we’ve given TuneCore a competitive advantage.

2020 wasn’t a great year for most people, but pandemic-induced lockdowns were a boon for the video-game industry, with gaming revenues nearly reaching those of sports and film combined. Game developers and publishers needed to meet the demands of millions of players at once, and Wargaming was one of them.

Wargaming, whose titles include World of Tanks, with over 160 million users, chose us to

For Wargaming and its customers, our native-language support has been a winner. The company can now scale language support as needed when launching a game or during unexpected surges or, conversely, agent absences. Better yet, it can do so quickly and cost-effectively, using agents who are hired not for their linguistic fluency but for their gaming knowledge and passion. Since employing our Language Operations platform, it has more than doubled its conversions from free to paid memberships, boosted CSAT scores, and helped response times in all 10 languages reach 95% in the first 24 hours.

When the pandemic hit, prompting lockdowns and postponing travel plans, the travel technology company Kiwi.com was hit, too — by a surge in cancellations and urgent CS requests. At the same time, Kiwi.com, which powers more than 100 million searches every day, was forced to lay off 70% of its support workforce. Naturally, there were endless backlogs, and CS quality suffered.

Unable to hire more native-speaking agents, the company needed to create a language-agnostic helpdesk platform that could translate any and every customer request. Its product team did just that, using Unbabel’s open API to integrate our Language Operations platform into its agents’ existing workflows.

Now, thanks to our AI translation technology and human editors, any Kiwi.com agent can immediately respond to helpdesk messages in 12 languages. With English-speaking agents, the company saves 20% per agent, and customer phone inquiries have been reduced by 33%. Both agents and customers appreciate the seamlessness.

For Logitech, which makes innovative technological products, the rise of remote work during the pandemic sent year-over-year revenue soaring 75% in the second quarter of 2020. CS request volume also soared — by an unprecedented 300% — while Logitech’s own customer experience (CX) team suddenly transitioned to remote work.

Faced with a daunting backlog, Logitech’s CX team was able to quickly increase staffing by 45% without increasing spending, and with only a weeklong hiring period for technical experts. How? The answer: Unbabel. We’d formed a long-term partnership with Logitech, helping them communicate with its global customer base across 13 verticals and 16 languages. Logitech reduced its ticket response time from 48 hours with a native speaker to just 12 hours with us.

What does it mean to STFU? It means increased CSAT scores and decreased response times. It means hiring people for what they’re good at, not what language they speak. It means no longer worrying that one language’s support is worse than another’s. And it means so much beyond that.